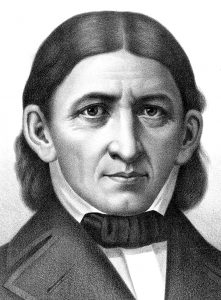 The Froebelian Occupation of Woodwork: A symbolic language of shape, form and space 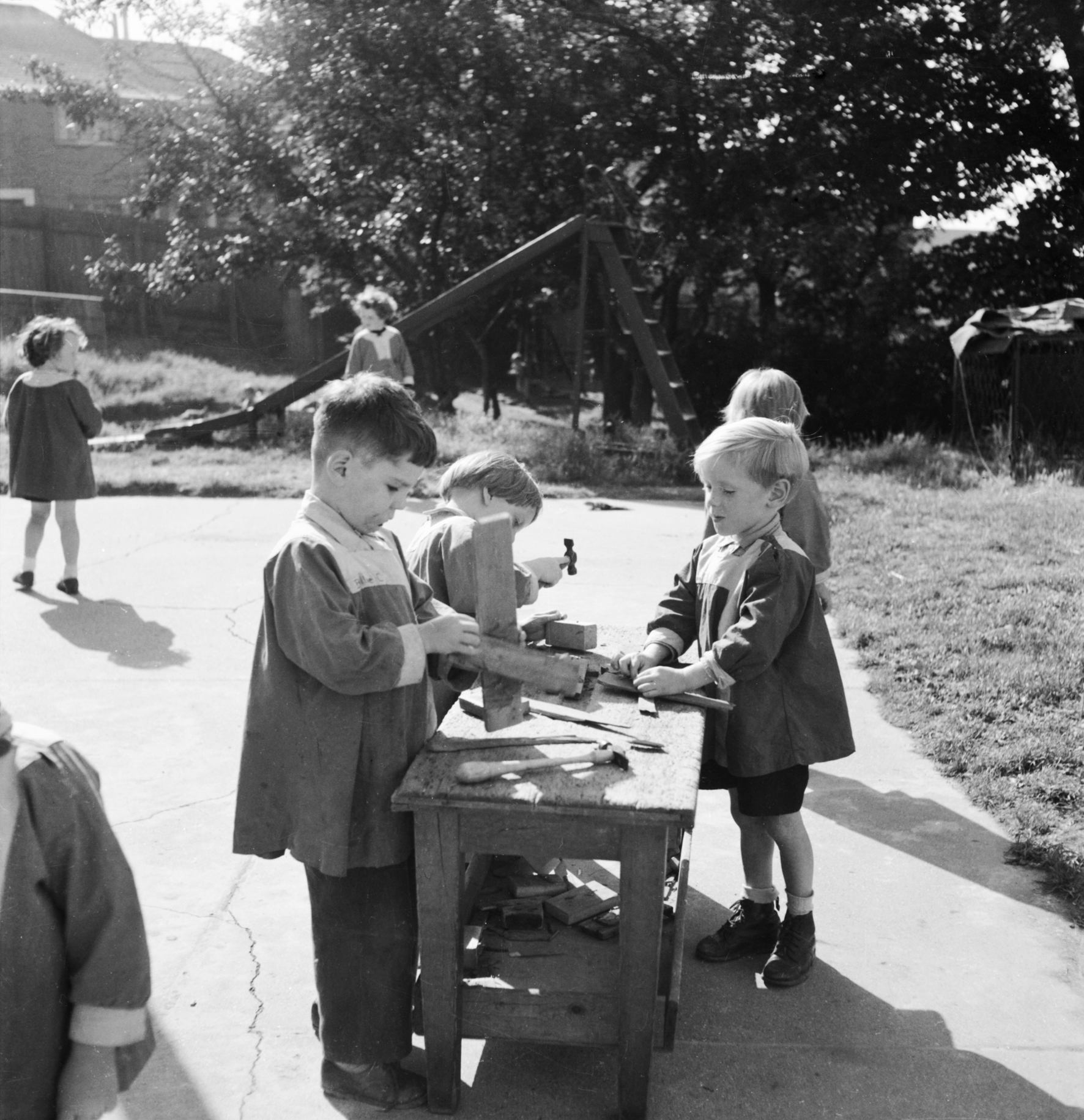 The earliest records of woodwork with young children come from the pioneering work of Friedrich Froebel (1782–1852), the founder of the kindergarten movement. His view was of children as holistic learners who learned most effectively by being active with their hands and minds. Froebel emphasised giving children hands-on involvement in practical learning and believed in combining imagination and physical movement in exploring interests.

‘To learn a thing in life and through doing is much more developing, cultivating and strengthening than to learn it merely through the verbal communication of ideas’.

Froebel seemed to have a natural affinity with wood, perhaps the experience of growing up in the rural countryside of eastern Germany, living in a beautifully constructed wooden house, and spending a lot of his childhood often playing in the woods or in the large wooden attic all made an impact. Froebel’s teachings emphasised play and learning through connection with natural materials and experiences with nature which he saw as both being nurturing for the soul and essential for children’s holistic development.

Froebel initially introduced wooden ‘gifts’ to children: sets of three-dimensional objects that would stimulate curiosity and could be manipulated, encouraging exploration, making connections, and especially developing spatial thinking. Froebel then introduced ‘occupations’ that expanded on the gifts, providing a greater diversity of materials and providing greater possibilities for exploration. This practical work was seen to develop life skills and was in part seen as preparation for later manual training and future work as well as for allowing children to reconstruct their experiences through play, and moving from concrete to more abstract thinking. Occupations included working with paper, parquetry, sewing, paint, weaving, clay and wood.

Wood was incorporated in to the group of occupations that included solid forms – which also included work with clay and construction kits.  Whilst not included in the initial set of occupations, woodwork became a very popular later addition dating back to circa 1845. Before starting his kindergarten in Bad Blankenburg in 1937 Froebel had co-founded a school in Keilhau. This school still has the original workshop and continues to embrace woodwork to this very day. Older children were very much involved in the actual construction of the school and over the years children have worked on a great number of woodworking projects such as building a cabin in the woods. 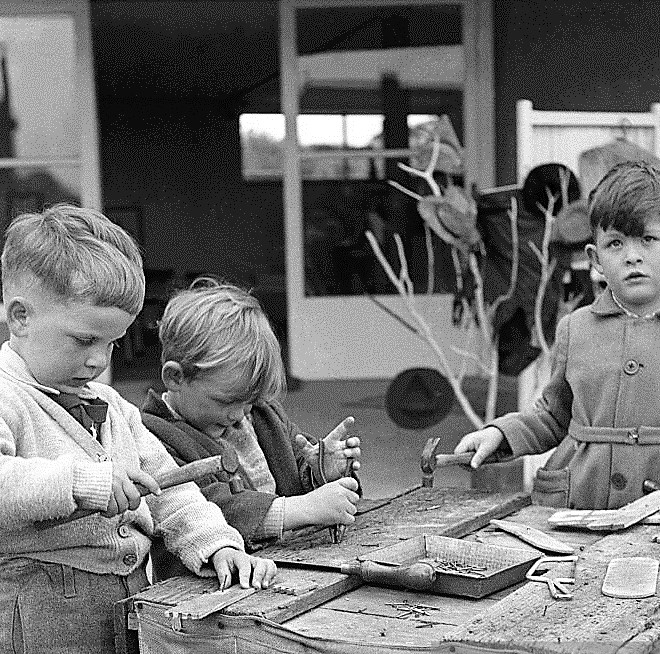 ‘Unlike the Gifts, the Occupations cannot return to their original forms once they are used. This gives the child a sense of permanence. Also, Occupation work, no matter the materials used, teach not only to be creative and patient, but also many of the art forms are life skills for the future’. Froebel Today

The Occupations really encouraged a cross-curricula approach to learning encompassing all areas of learning and facilitated making connections between areas. They encourage creativity and individual expression in a number of ways and are particularly good for building children’s self-confidence and self-esteem.

“My educational method offers to its pupils from the beginning the opportunity to collect their own experiences from things themselves, to look with their own eyes and to learn to know by their own experiments, things and the relations of things to each other, and also the real life of the world of humanity.” Friedrich Froebel

Gustav Kalb who was very much inspired by Froebel wrote The First Lessons in Hand and Eye Training in 1895, which further developed and elaborated on Froebel’s ideas for using wood in kindergarten as an occupation as well as for developing manual training with older children.

The influence of Froebel’s work with wood spread internationally, initially in Scandinavia, through the sloyd education movement. In Finland, Uno Cygnaeus (1810–1888) was very much inspired by Froebel’s ideas and through his work it became mandatory to introduce craftwork into folk schools in 1866. Cygnaeus’s intent was to develop children’s practical knowledge and aesthetic sense and improve children’s thinking. He saw his work as being a natural development of Froebel’s kindergarten.

Sloyd aimed to develop practical knowledge, the ability to solve practical problems through knowledge of different working processes, and to learn how to evaluate work and refine work through experimentation. Woodwork was at the forefront but other crafts such as paper folding and work with fabrics were included. Working with the hands was thought to enhance cognitive development and give greater relevance to learning, and was seen to build confidence and instil a respect for the dignity of labour.

In 1872 sloyd was then introduced to Sweden by Otto Salomon (1849–1907), who was a passionate advocate of woodwork and was strongly influenced by Cygnaeus and Froebel. In 1875 Otto Salomon started a School of Crafts at Nääs near Gothenburg, where he worked to popularise the educational sloyd movement and trained teachers from all over the world in woodwork. The Nääs School’s special educational methods made sure all students who trained there gained a solid grounding in knowledge and theory of sloyd as well as learning practical skills. 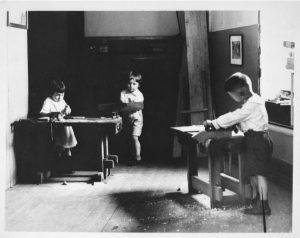 The Nääs School was extremely successful and it gained a far-reaching reputation, being attended by many hundreds of international teachers including a number of pioneering early English educators. At one time 19 different nationalities took part in one of the courses. It continued to deliver training right through until the late 1960s. Solomon’s book The Teacher’s Handbook of Sloyd was translated into English in 1891. The sloyd movement was embraced across all the Scandinavian countries; Finland, Sweden, Denmark, Norway and Iceland, where the pedagogy still plays an important part in education today.

Froebel’s ideas about woodwork as an occupation made a significant impact to the early development of both elementary schools and nurseries in the UK. At the time Froebelian pedagogy was strongly prevalent as was the related influence of Sloyd.

Joseph Judd a teacher trainer for the National Froebel Union in the UK wrote in 1906:

Of the many and varied schemes of practical work devised with the object of training the hand to deftness and the eye to accuracy in observation, none has met with so widespread acceptance as woodwork. The required material, being a direct and universal product of nature, is readily obtainable, cheap, and easily worked into forms of beauty, either in its natural or prepared state. Its ready adaptability to a course of handwork is a continuation of the gifts and occupations.

Woodwork as an occupation is designed to cultivate the active and creative instincts; to give practice in failure and success; to test the ability to concentrate the mind whilst doing a definite thing; to provide means of communication between the teacher and the child, whereby the latter can render observant information, from which the teacher can impart more exact knowledge; to open up an avenue of research for the student of child life, and to give to the teacher full scope for individualism in the attainment of educational ideals.(Judd 1906)

As Froebel’s ideas and those of the sloyd movement both influenced the introduction of woodwork in the UK and many other countries, with ideas and practices being adapted responding to the particular styles of tools available and already established techniques. This resulted in slightly different approaches to woodwork from country to country whilst still retaining a strong common core. 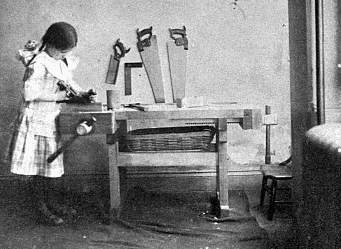 In the UK, from the 1850s onwards there are examples of individual elementary and nursery settings including woodwork in their provision. Interest grew rapidly in the 1880s and 1890s. The Froebel Society (1874) The National Froebel Union (1887) and the Sloyd Association (1888), all based in London, played significant role in disseminating information. Many UK teachers returning from the Nääs training college helped spread the word and teachers also participated in sloyd summer schools in the UK.

For 20 years, between 1882 and 1902 Hand and Eye Journal: Sloyd, kindergarten and all forms of manual training was published to support hand and eye training with the ambition to promote sloyd within the Froebel movement.

Tools have a strange fascination upon all children, they love to hammer, to cut, to make, and under trained guidance simple woodwork undoubtedly stimulates latent inventive talents more quickly than any other known medium. (Judd 1906)

In the subsequent years it was almost unheard of to come across an early years setting not offering woodwork – all owing a debt to Frederich Froebel.

In the dark ages of fear during the 1980s and 90s – created by the litigation of compensation culture and the associated overzealous health and safety restrictions woodwork was pretty much eradicated from schools.

Until recently only small proportion of early years settings provided woodwork provision and very few primaries. But thankfully the tide is turning, with authorities now promoting a much more balance attitude to risk.

Now, once again Froebel’s ideas are being embraced and currently there is a surge of interest in woodworking in Early Years education which will benefit a children in many ways 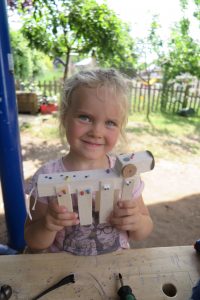 Today, teachers who provide woodwork, regularly observe exceptional levels of engagement, with deep focus and concentration accompanied with persistence and perseverance with challenging tasks – especially with complex problem solving. It can be central to the EYFS being a truly cross curricular activity, encompassing all areas of learning and development. Woodwork is exceptional for developing children’s creative and critical thinking skills as children tinker and experiment with the possibilities of wood and tools, and then go on to express ideas and resolve their work. Woodwork it is not about what children make – it is all about the changes that are happening within the child. Woodwork is seen to make a significant impact on children’s self-esteem and confidence and it develops their sense of agency – that “can-do” mind-set.

In our increasing digital world having children experience making with real tools is becoming more important than ever and for the majority children, experience in early years could be the only time in their whole education that they will work practically with tools. This is clearly a disservice to children as so many will go on to work with tools in a variety of contexts later in life. Fortunately the experience of working with tools leaves a deep memory so the experience of woodwork in early years can have a significant long-lasting impact. Woodwork also gives children the experience of making and repairing, countering the prevalent culture today of consuming and disposing. Values that Froebel would very much of adhered to. 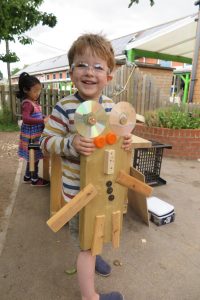 Woodwork is like a symbolic language of shape, form and space. It encompasses a way of working that develops over time as children express their ideas with increasing fluency and complexity. As children tinker and experiment with wood and tools, as they construct and create, and explore narratives these experiences will all contribute to building rich foundations for children’s healthy social, emotional, physical and cognitive development  Let’s continue Froebel’s work to make these rich experiences available to all children! We can still hear the echo of his children hammering as his pioneering work lives on!

‘Play is not trivial – it is highly serious’ Froebel

For further reading:
Learning Through Woodwork: Introducing Woodwork in the Early Years By Pete Moorhouse
Routledge 2018