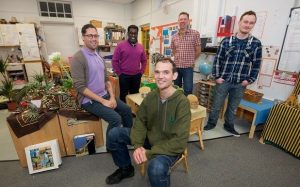 Through my work delivering training and presentations I get to participate in a number of early years conferences. I am always taken aback by the lack of men – sometimes none at a conference of over 200 people, often just one or two solitary figures in a sea of women.

The statistics vary due to sources and figures vary slightly according to the specific sector  – but it is widely accepted that less than 2% of the early years workforce is male. It is clear that there is still a long way to go in changing the gender balance of those working in the early years. This is pretty much the same situation in many countries, some having even less, for example southern European countries. Norway is an example of reversing this trend. They made a determined effort to encourage more men into early years and numbers increased from 3% in 1991 to 10% 2008. In 2012 the UK coalition government published targets for raising the number of men working in childcare. There is little evidence of any progress. A recent Mori poll found that while the majority of parents are in favour of men working in childcare professions there were still 12% opposed.

Benefits of men in early years

Children benefit from having both genders in a setting and this can contribute to a more holistic nurturing environment.

Many children may not have a male figure in their home lives, male early years practitioners can provide the experience of a positive male role model.

It can allow children who have had negative experiences with men build positive relationships with men in safe caring environment.

Having positive male role models may in fact help reduce the attainment gap. There are currently many concerns regarding boys’ levels of academic achievement in comparison to the achievement of girls across the education system. Having men supporting and encouraging learning may help develop boy’s positive attitudes to learning.

Nurseries and pre-schools are dominated by female teachers, mothers and female carers. Fathers can feel uncomfortable in this environment and be reluctant to get involved in their child’s education. Fathers may often miss out on information or feeling included in their child’s time in early years. A male figure within the nursery or pre-school will support fathers in their involvement and understanding. It can also impact on how fathers feel about their role as care givers.

Children can benefit from the different experiences and caring styles men bring to the profession – this can impact on reducing the levels of challenging behaviour. Much has been written about gender difference in relation to attitudes to risk with men (generalisation) allowing children more freedom to take on new challenges.

Men can sometimes bring more play, active movement, entertainment and ‘rough and tumble’ play to the way they interact with their children. This can be a positive interaction when managed effectively and children respond positively to this variety of input.

Having men in the setting provides children with a more accurate reflection of the gender mix of their community and the world around them.

Male practitioners can challenge the stereotypes in relation to toys and activities. If we want our children to grow up in a world where there is equality of opportunity for all we need to challenge stereotypes – men can cook – playing in the home corner, men can clean – and of course work with young children.

What are the barriers for men:

There is still a prevailing attitude that caring for the young is women’s work and it is unmanly. These days, roles are becoming more fluid, often with both parents taking caring roles for their young children or even men staying home to look after young children while his partner works. But this trend is not being evidenced in male staffing numbers working in early years.

Men may be discouraged by the prospect of working in a predominantly female environment – perhaps feeling out of place. It can feel awkward and isolating being the only male in a team, the only man in the staff room at lunch time. Could it also be that some are reluctant to employ men – despite being of equal merit?

How do we feel as men as carers. Caring is often perceived to suit female staff due to their caring nature and maternal instinct. How do we feel with men comforting children – sometimes children will need a cuddle, a comforting arm, want to sit on your lap. Sometimes this can sound alarm bells. Was that inappropriate contact? A reality is that the majority of abusers are male and thus we can tend to be more suspicious – whether consciously or subconsciously. The impact of this is that men can be apprehensive to nurture and support children in a healthy, natural way. Many men across the country have talked about the increasing constraint they feel in having physical contact with children in their care.

There needs to be more support from senior leadership teams to help male staff cope with negative attitudes and to build their confidence as valued practitioners. Leadership also needs to know how to sensitively manage allegations if they are made against men. There needs to be more advice and guidance both for men and settings on how to navigate these issues.

The wages obviously are not an attraction – as a sector in general it is clear that successive government have undervalued early years professionals and quality provision. But lots of us work in Early Years despite the low wages – because we know what a delight and joy it is to work with young children. We have to share this secret!

When I do talk with men that work in early Years – their commitment is clear, seeing it as a privilege to be a part of children’s learning and development and ensuring that the children in their care make the best possible progress. They make an important contribution.

As a sector I believe we need to make much more effort to encourage men to train to become nursery workers and early years teachers. We need to provide better career guidance and improve recruitment.

We also need to support male colleagues to continue enjoying working in and remain in the profession.  We can all work towards providing a better gender balance for the children in our care.